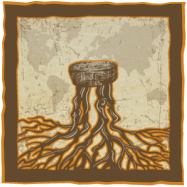 My four legged stool, the strength of
my soul and upon it I shall rest.
Welcome - We all have unique four legged stools, each leg an extension from our grandparents who contribute to our being. At conception, our entire biology stems from our forebears, the history that preceded us. Our environment, first from within the womb then from without, people and events, often beyond our control, shape us further. If history does repeat, did our forebears experience what we now are experiencing? And if so, will we react as they once did? And if our biological bonds forget, will random energy pulses trigger a memory cord? 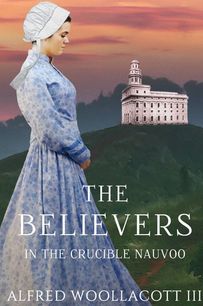 ​"The Believers In The Crucible Nauvoo" is available for sale on Amazon by clicking on the envelop icon -- locally available at "Bunch of Grapes", Vineyard Haven -- by mailing to Myfourleggedstool Publishers P.O. Box 2911 Oak Bluffs, MA 02557, or by emailing mv4al@aol.com
On this site are several register formatted, diligently footnoted papers on my or my wife Jill's four legged stools. My paternal grandparents' surnames are WOOLLACOTT and WILLIAMS and my maternal ones are NAULT and YOUNG; Jill's are CHANDLER and HART, GERMOND and CHAMBERLAIN, respectively.While I lack any drop of blood in my veins from those last four surnames, our children do and those four form two of their legs. So yes, in a general sense, we are both 3/4 English and 1/4 French, with our French coming from our mothers' fathers. Links to our seven generation fan charts are below to give you other surnames in our genealogy.

The charts, like the genealogical journey they reflect, have holes and are always being refined. Some ancestors, who preceded the seven generations shown, are known, but not presented. Others, who are shown, lack basic information, reflecting the varying comfort levels of my research thus far.  If their published genealogy is under the sections "Alfred's Four Legged Stool" or "Jill's Four Legged Stool", then my comfort is extremely high. But for others, further research may be needed before I reach a near certainty. Thus, I am loathe to publish my over 4,500 names on my Legacy file since I could  perpetuate misinformation. So if some surnames pique an interest, send me an e-mail, and we can discuss them further.

"The Believers In The Crucible Nauvoo" published October 2017

Reuben's daughter Susanna, her husband, two of their children, and Naamah, Reuben's granddaughter, like many from the Peterborough, New Hampshire in the 1840s, were inspired by Joseph Smith teachings and traveled to Nauvoo, Illinois. "The Believers", a meticulously researched novel, weaves the momentous events of Joseph Smith’s martyrdom and Brigham Young’s succession with Naamah’s story and offers differing perspectives to create a mosaic of Nauvoo, the crucible out of which arose today’s Church of Jesus Christ of the Latter-day Saints.  "The Believers"  tabs has more.