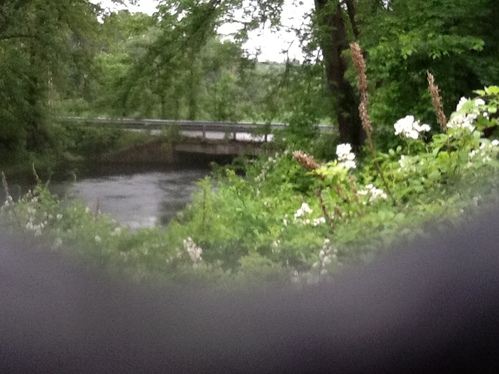 John Law appears in West Concord circa 1655 tending sheep on a "new grant" of land, which  Concord received from the Commonwealth for public grazing. A Scottish man, John may have been a prisoner of war captured at either Dunbar (3 September 1650) or Worcester (3 September 1651). As the above road sign that bears his name shows, Acton was incorporated out of  Concord in 1735. John Law was the first settler in the area, and lacking a land grant, Concord residents most likely considered him a squatter.

He was opportunistic, settling near a brook for water and an added barrier from Concord Center. The brook now flows close to the Lawsbrook Road and School Street intersection in Acton. The scene shown to above may be similar to what John Law first saw in 1655, and in my imagination, the bridge and guard rails do not exist. Perhaps later, John lashed sturdy limbs together and set them upon rocks to cross from his wilderness to Concord Center. But given what little we know of him, I doubt he often traveled east. If you were a Scottish Immigrant living in a Puritan Theocracy, wouldn't you have been reclusive?

In Marion Houghton's article about him, she says, "we know he was stubborn, proud, and held himself aloof from outsiders, but he was brave, hardworking, and devoted to his family." He struggled with Concord officials to obtain title to his land for  forty years before achieving success. John Law of Acton, Massachusetts and Reuben Law of Acton, Massachusetts and Sharon, Hampshire were published in the MASSOG Spring and Summer 2011 editions, respectively. Here is a link to the John Law article  /uploads/1/9/2/5/19256439/law1_from_massogvol35no1spring2011.pdf