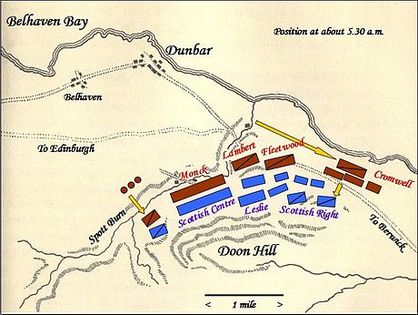 A fourteen year old John Law may have been at Dunbar, Scotland on 3 September 1650. In "The Immigrant", he was.

“The Lord of Hosts.”

John’s eyes flew open with the bellow from approaching soldiers at about 4:00 a.m.  in a dark, misty fog. He had heard movement during the night, but Malcolm’s mentoring had made him a warrior. He had ignored the sounds, just as Malcolm would have. But there was no mistaking this bellow. It was an English battle cry. He threw off the cornstalks and struggled to arise out of the mud that had jelled around him.

“The Lord of Hosts” was bellowed again.

Silhouettes of cavalrymen, followed by Roundhead soldiers, splashed out of Brox Burn between the Scottish cavalry on the south road and the infantry to the west. The Scottish force around John was at the center of the English attack. They had been caught unprepared and now scrambled to face the onslaught. Thundering hooves trampled some, and clanging iron felled others. The Scottish force was being pushed up Doon Hill. John searched for his pike among the darkened jumble of mud and stalks. He dropped to all fours and thrashed where he had slept. A crescendo of agonizing screams came from his retreating comrades. His heart pounded and head swirled as he rummaged. When a retreating comrade stumbled and flipped across John’s back, he scrambled on all fours until he had room to arise and sprint away. He covered his ears to lessen the reverberating screams, clanging iron, musket fire and occasional rumble of cannons. Only one cry seemed constant.

“The Lord of Hosts.”

John continued his panic-ridden scamper until he felt safely away. He removed his hands from his ears and placed them on his thighs, hunched over and panted. The Scots now seemed to be holding the Roundheads in check with ferocious hand-to-hand combat. John turned toward Doon Hill and thought about running further away. Once beyond it, his joyous, promised journey home could begin. The sun would soon be emerging from the North Sea. He needed to act while dim light still prevailed.

He sprinted up the brae, but stopped to see a distant swing of a rider’s sword cut through the hamstrings of a fleeing pikeman, who struggled like a newborn foal to arise as he gripped his dangling flesh and begged his assailant to end his life. The cavalryman laughed and rode away looking for more fleeing Scots. The hillside was covered with sword wielding English cavalry.

“Alba gu bráth,” was bellowed in perfect Gaelic dialect. A swarm of Scots rushed past John to join their countrymen still engaged in hand-to-hand combat. The battle cry and images of Malcolm brandishing his sword and Jamus MacLawson clad in his tartans appeared. John was reinvigorated and joined the counter surge. But his excitement ebbed when he realized he needed a weapon. He spotted a glistening, partially unsheathed sword of a fallen warrior and ran to it.

The warrior was clad in the familiar saffron cloak, which was belted to form a pleated kilt. He was lying face down with his skull partially crushed by hooves. John rolled him over to unsheathe his basket hilt sword. As he did, the open-eyed warrior stared back. John’s stomach knotted, and he collapsed onto the ground. “Me God, it be Malcolm Dinsmore.” John pulled his knees to his chest. He lowered his head and swayed it back and forth. His mighty warrior, his mentor, his fleeting surrogate father had never used his sword. John remained paralyzed until rage freed him. He looked heavenward and gave a defiant head shake.

John arose, gripped Malcolm’s sword and rolled his wrist. The gleam was fascinating, and John didn’t notice the back pedaling Scots or those who broke rank and ran. Amid the roar of battle, a fallen Roundhead’s murmur grew distinct. As John neared him, his murmuring became taunting whispers from a haughty Englishman, the sole cause of John's despair. He raised Malcolm’s sword, and with an impulsive surge, he slashed through the Roundhead. The murmuring ended, but John’s misery didn’t. He hacked until weary and paused to gather enough strength for a final blow. As he raised the sword, blood trickled onto his hand, and he smeared it onto his tired, sinewy forearm. Its sticky warmth made his spine tingled. He smeared it on his face, and his tingling exploded though his entire being, eclipsing his despair. He was electrified when he roared, “Me Scotland will nae die. Alba gu bráth.”

But the roar quelled his bravado, and the carnage about him extinguished it. He had slain a lone, helpless Englishman. He cocked his arm to heave the sword, but paused. He ran to Malcolm and fitted the sword back into his hand. He moved Malcolm’s arm so his sword now lay across his chest. Malcolm’s opened eyes seemed appreciative. Lacking the bluster of before, he said, “Alba gu bráth, me friend.”

Roundheads had now driven through the Scottish line. John was cut off from the left flank. The English were all around him and moving closer. “Ever see penned in swine awaiting their slaughter?” As Andrew’s word echoed in his head, John now knew he had trusted the wrong man. Andrew Wright had been more perceptive than Malcolm Dinsmore.

A few Scots tried to break through the ever tightening circle, but were immediately slashed down. John remained confined as the English shoved their swords at the Scots on the perimeter. Some Scots shrieked and fell when English swords penetrated their sides. John fought through the clustering Scots to get further away from the edge. The poking into a ball of humanity continued until the English grew either arm weary or just bored with their sport. The terror-filled Scots remained transfixed on the sneering, English faces, wondering when they might resume their amusement. The English began to giggle, and it rumbled into laughter. They broke their stares and eased back while still laughing.

Officers trickled across the field to take charge of the captives and restore order to the unruly Englishmen. The Roundheads’ exuberance quelled, and some paused to ponder the horror strewn about them. The Scottish relaxed their huddle now that threats of pike thrusts had diminished.

John sensed the attack was over for now, and he moved from the center of the clustered Scots. The sun had burned the mist off of Doon Hill. The gloomy past few days had been replaced with radiance. Doon Hill seemed like it has been for ages, unaware of the carnage below, basking in the sun while salty dew created an awe-inspiring, prism-like glow. John had marched up Doon Hill and back down it. Now, desperate Scots ran for their lives back up it. He thought of the irony and insanity of it all. Even his naïve mind realized the Scots had been given an incredible advantage, and they wasted it. John seethed as he thought, The English will e'er be bastards. Me will nae forget.

John turned away from Doon Hill as Andrew came near. “Seen Malcolm?” he asked.

John pointed to the distance. “Dead.”

Andrew shook his head. “Well, he wanted this fight. Me be sure he slayed many before he died.”

“Nae be much,” said Andrew as he pressed on his shoulder. “You be blood spattered too. You will be heading to yah mum, real soon.”

Had John heard the always insightful Andrew correctly? Had God finally heard John’s pleading? His mother’s agonized image finally smiled.  He would be home in time for the harvest, swinging a scythe under a brilliant autumn sky.

“The English only want the hearty, nae the wounded,” said Andrew. He pressed harder on his shoulder to try to clot the now spurting blood. “Of course, we have to make it home. How bad be your wounds?”

Andrew coughed and spat some blood. “Aw, too bad laddie. Guess you’ll nae be seeing yah mum after all.”  He laughed until he choked on a gurgle of blood. He spat the bloody phlegm close to John’s feet and resumed chuckling.

John’s delight of reuniting with his mother had been snuffed out as quickly as it came. Were these false hopes merely God’s cruel trick to keep him from facing reality?