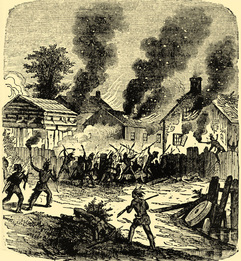 King's Philip's War was the armed conflict between the Native Americans and the seventeenth century settlers of Puritan America. In a year and half, twelve of the region's towns were destroyed with many more damaged, and its population was decimated, losing one-tenth of all men available for military service. Many settlers on the outskirts fled their homes for the safety of garrisoned towns and villages. John Law did not; choosing instead, to remain in his "New Scotland" across the river from Concord, Massachusetts, virtually alone with his wife, Lydia, and their two sons. On 22 April 1676, King Philip's men attacked Sudbury, Massachusetts, a town close to John's New Scotland. ﻿

In "The Immigrant", John Law arose early after the Sudbury attack.

A gray cloud drifted among budding tree limbs on a southwest breeze. As it neared, the smoke grew pungent. John heard a distant clamor, which awoke him from his now recurring lament of Nagoglancit’s unjust fate and his inability to help. But he had left his lament, went outside and looked to the sound. A red glow illuminated the horizon where the gray cloud now drifted. The strange sounds had also awakened Lydia. John had told her the clamor was nothing, but he doubted she believed him.

Because his fields needed tending this morning, there was no time for worrying. He trudged up the rise. But he was weary from another fitful night, and his fears wouldn’t leave this day. As he stared at the unplowed field, he wondered if his crops would still be standing by the summer. The advent of spring always lifted his spirits, but not so in the spring of 1676. King Philip’s War was omnipresent. Why should me even bother? And John headed back down the rise.

The door creaked, and Lydia emerged. She twitched her nostrils, looked at the cloud and to John.

She shut her eyes, folded her hands and mumbled as John neared. She opened them and looked to the heavens.

“King Philip and the Nipmucs be moving east from Marlborough,” said John.

“And ye town next to Sudbury?” asked Lydia. John grimaced, and Lydia answered her question. “Next to Sudbury is thy New Scotland.”

John put his arm around Lydia’s shoulder. She smiled to acknowledge his thoughtfulness. But her face quickly became as impassive as before. “Our providence is with God. I pray our death, if God so deems it, will be swift.” Lydia had grown inured to the war, but not as resigned as she was now. Her eyes welled, and she drew her hands to them. “I prayed last night that God’s providence for Mary Rowlandson is swift.”

“The captive of the Lancaster attack?” asked John.

“But it be nigh on two months. They must be dead by now.” Lydia raised an eyebrow and stepped away. “That second Lancaster attack be revenge for your Captain Mosely. Aye, for sure, John Hoare foretold of it.”

Lydia flashed a dismissive hand. “I doubt John Hoare foretold anything. Since Mosely, the attacks have been endless. Even a village simpleton would appear a wise man for saying they would come.”

Lydia looked at the ground as she stepped. “Mary is alive, but her burdens are never ending. She hath died many times.” Lydia flicked her eyes, looked to the heavens and back to John. Emotions now carved her face. “My ordeal was but a night, but Mary’s,” and Lydia rushed her hands to her face. Pain now poured from her eyes. “Maybe God’s providence will end her ordeal soon?” Lydia watched the smoke drift, turned to the rising sun and inhaled.  She scuffed at a sod clump. “Goody Davis said…”

“Aha, Goody Davis. Why do you listen to her mistruths?”

“Goody Davis may be a gossip, but God hath blessed her with eyes that see from the back of her bonnet. She knows of what she speaks.” John considered debating Goody Davis’s worth, but decided to let it go.

Lydia ambled away from the cloud, alternating her gaze between the ground and the sunrise. “Goody Davis said Mary is to be ransomed. The goodwives of Boston are holding a public subscription to raise money as we speak.” She turned back to John. Terror now filled her eyes. “I carry her burden and live her ordeal each night.”

John closed his eyes. Lydia’s restlessness had increased these past few months. She would lay quiet for hours, as if in a trance. When she dozed, she often awoke with a jolt. She would crawl into his embrace until her panic climaxed and her trembling ceased. She had said nothing, but now John knew the cause of her increased trauma.

The sunrise shimmered on the dewy fields, the early morning fog was dissipating, and songbirds’ pleasing trills were peppered with annoying caws. Lydia’s head hung low as she continued to worry about Mary Rowlandson. She ceased meandering and looked to the sky. “Mercy, those crows.” She turned back to John. “We have chores to do this morn. I will awaken thy sons.” And Lydia marched back to the house.