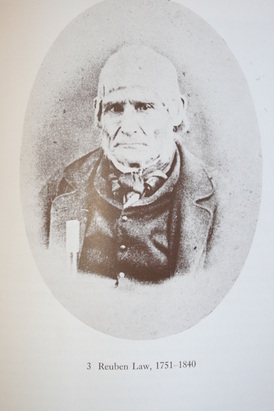 The photograph to the left was copied from H. Thorn King, Jr.'s book "Sliptown - the History of Sharon, New Hampshire 1738 - 1941". Reuben Law, my four-greats grandfather, was John Law's great grandson. He had several major life events in common with John; they fought the British Empire, although the end results were quite different; they settled lands away from main stream establishments and they lost their fathers while still young.


I came upon this photograph long after I began documenting his life. My mind's image was something quite different. He was a twenty-something militia man. who had never been in a battle, staring across the Concord bridge at the mighty British Empire, trying not to project the fear that roiled his body and perhaps wondering what would come next. Those with a love of history know what happened next. To those with less of a love, they may remember the phrase "the shot heard 'round the world". The initial horror that Reuben experienced probably eased with time and maybe he understood the full meaning of that fateful morning before he died. I am certain that his recollection is far more vivid than the hackneyed saying we so casually use today expresses.

Reuben is in his twilight years in this photograph, perhaps eighty-something. I am unsure if he is proud of his attire or simply enduring it until after the photograph is taken. His deep set eyes partially shaded under a furled brow are captivating and the more you study them the more expressive they become. They project a lifetime of his images, some seem sad and there are traces of apprehension. But the tightly drawn lips, perhaps concealing aged teeth, project a resolve that whatever life offers, he will deal with it. Reuben Law died in his 89th year on 21 August 1840 and is buried in Jarmany Hill Cemetery, Sharon, New Hampshire. The entrance to that remote patch of eternal rest is shown above.