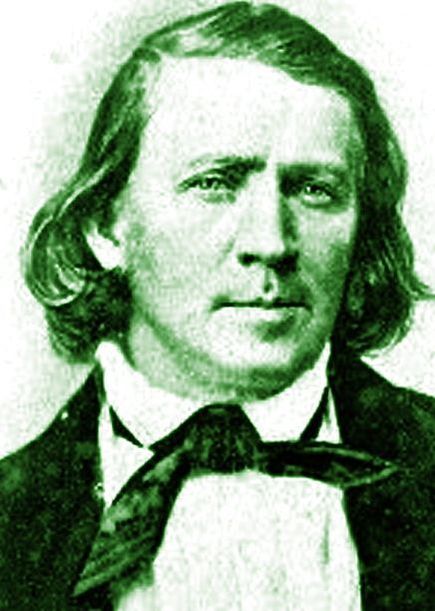 In July 1844, Brigham Young, pictured to the left, arrived in Peterborough to address a general conference of the faithful. Neither they nor Brigham were aware of the horrific events that had occurred in a Carthage jail cell two weeks ago. Naamah Carter was in the audience when Brigham spoke on 13 July 1844. She had heard of him, but had never borne witness to him. She returned home that day and found a letter from Brother John Twiss, a young man who had caught her fancy before he left for Nauvoo.

A weary Naamah lay on her bed, urging herself to arise and make breakfast. But she nodded off until the aroma of baking buns stirred her anew. She dressed hurriedly and scurried to the kitchen, where Susan was cooking and Betsey sat frowning, waiting impatiently.

“My, aren’t you a fright today,” said Betsey.

Susan placed the muffin pan down and turned to Naamah. “Didn’t sleep well?”

“Well, you need to do something,” said Betsey. “You look plumb tuckered out.”

It was indeed Naamah’s big day, and the reason for her fatigue. Brigham Young had arrived yesterday and met with some Brethren. Joseph Smith had not come, much as she had expected. Brigham would speak today, and she had been restless, wondering what one so close to the Prophet might say.

On her way to the conference, she thought of her breakfast with Susan: fresh strawberries with cream, muffins, and eggs prepared to perfection. Her student had graduated. As they ate, Susan had talked about a young man who had caught her fancy. Once she sensed Susan was searching for advice, Naamah had grown uneasy, as both Susan and Betsey knew more about men than her.

“Land sakes, your eyes are so fleshy.” Betsey’s parting remarks to her returned, and Naamah pressed on her baggy eyes. She smoothed the rice powder on her cheeks, fluffed her hanging tresses, and pressed her eyes again. As she neared the gathering, she sidled up to Sisters Eleanor and Amelia. “I’m so excited I could burst,” she said.

Sister Eleanor turned around with a gleam in her eyes.

Naamah brushed her cheeks and dabbed beneath her eyes. “I scarcely slept. Do I look a fright?”

“Fright?” said Amelia. “Why, you look like a porcelain angel, as you always do.”

Naamah ceased primping and touched Amelia’s forearm. “Bless you for such kind words.” She pursed her lips and thought, That Betsey, why do I listen?

The Sisters moved toward the hall. Inside, Naamah hurried to some open seats, as the hall was filling fast. She fluffed her dress while surveying and nodding to the familiar faces. They appeared as pent-up as she felt. She noticed some less familiar faces. Ah, the saints from Jaffrey, which provoked another thought. I wonder how Brother Twiss is faring. She lingered over thoughts of him, wondering why he suddenly came to mind.

The din subsided as Elder Glenn approached the podium. He was barely noticeable behind the stand, and Naamah thought, Such a little man. When he said, “Today’s preacher is Elder Brigham Young,” Naamah looked to him. She knew of him, but had never seen him. Even seated, he seemed formidable. She glanced at Glenn and was drawn back to Brigham. She studied him, not hearing Glenn at all.

Brigham gripped the chair’s sides to arise and marched to the podium as Glenn moved away. With each step, Naamah’s anticipation grew. He was neither tall nor angular like Maginn, but compact, a dominating presence. His broad forehead and thin, tightly drawn lips projected authority. He gripped the podium sides with the same resolve he had gripped his chair, a powerful man able to crush it at will, if he so desired.  He didn’t speak, just scanned, and when his eyes approached Naamah’s, he paused. The resolve in his eyes frightened her until they eased to become a window into his soul. She was awe-filled, feeling as though through Brigham, she was a step from the Prophet, closer than she had ever been.

He ceased surveying and spoke. He lacked prepared notes, unlike Glenn, and didn’t quote scriptures like Maginn. He spoke from his soul, to which Naamah had just borne witness. Erect, gripping the podium, his voice thundered as he slowly scanned to ensure his audience remained captivated. He paused to focus on Naamah again and said, “The death of one, or of the Twelve, will not destroy the priesthood, nor hinder the Lord’s work.”

His eyes shifted away, and Naamah believed those words were meant for her. Perhaps she had been too critical of Elder Glenn, always comparing him to Maginn. The truth came from the Prophet through the elders, regardless of one’s speaking ability.

Brigham concluded and strode back to his chair. Others followed, but Naamah’s thoughts drifted often to Brigham’s words. She tried to concentrate on the other speakers but couldn’t keep her eyes from Brigham. He sat, legs crossed and listening, still commanding the stage. If he hath filled my soul, Naamah wondered, what would the Prophet do to me?

The final speaker concluded, and Naamah remained seated, reflecting, until the stirring broke her interlude. She turned to Sister Amelia. “I’m exhausted. I’ve never been so aroused in my life. Oh, and Elder Young was . . .” Naamah paused to reflect more.

“I reckon,” said Amelia. “But each touched my soul.”

Naamah gathered with some sisters for further discussion. Amelia talked again about going to Nauvoo, and Naamah was determined to leave with her. On her walk home, she was buoyant, filled with the Holy Ghost. She thought of Betsey’s remark: “Isn’t today your big day?” She smiled as Brigham returned to her mind. More than I could imagine.

When she opened the door, she heard its distinctive squeak. “Susan,” she said as she stood in the doorjamb. She moved to the kitchen. “Betsey?”
​
She looked around and noticed paper folded twice to form an envelope propped against a tin with wildflowers in it. She grabbed it and saw Sister Naamah Carter Peterborough, New Hampshire.

Her heart raced as she turned it over and broke the red wax seal. She unfolded it and saw.

8 April 1844, Nauvoo
Dear Sister Naamah Carter,
​
I have taken my quill in hand often to write to you, only to put it down for fear of being too bold. Today, while listening to our Prophet discuss the passing of Elder Follett, by chance I happened upon Brother George Taggart. He said writing you would indeed be fitting and proper since we had been earlier acquainted.

Naamah’s heart fluttered, and she moved to a chair. She inhaled and continued reading:

I have not been blest with words to describe the peace I receive whenever the Prophet speaks. His simple truths are straight from God. I know in my heart the truths Elder Maginn spoke came from God through the Prophet. Nauvoo is truly His heavenly kingdom on earth.

Naamah squinted as she tried to decipher the scrawl among the smudges. Her heart fluttered anew once she realized what was written:

My prayer is for you to come and experience the Prophet’s words. With God’s help, I trust your baby sister’s needs no longer require your tending. My heart would be almighty filled to see you again.  Brother John Twiss.

Naamah eased against the chair rest and placed the letter to her bosom. After a few minutes, she eased forward and re-read it, noticing the April date. Hmm, three months past, I wonder . . . She recalled others lamenting delays in receiving letters from Nauvoo.

The door squeaked, and Betsey stormed in. “Aha, you found your letter. Was it from your fella?”

“The postmaster said it was from Nauvoo. And I reckoned it . . .”

“When did you get this letter?”

“My mind’s been elsewhere. I’m getting married you know.” Betsey stepped away before turning to face Naamah again. “I don’t rightly recall.”

Naamah settled back against the chair.

“So,” said Betsey as she inched closer, “was it from your fella?”

“It was from a dear, dear friend,” said Naamah. She arose and left.