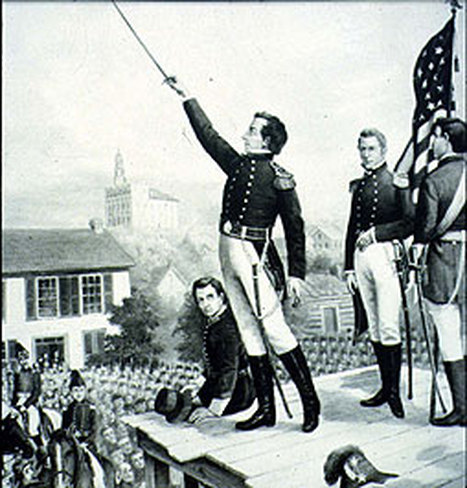 Pictured at the left is Joseph Smith giving his last public address before his death in a Carthage jail cell. In "The Believers", Naamah Carter's cousin, George Taggart was a fifer in the Nauvoo Legion Band. He was assembled below the podium as Joseph spoke on 18 June 1844. Ten days later, he was with his Legion retrieving the  Joseph and Hyrum Smith's bodies and traveling twenty miles from Carthage to Nauvoo.

On 29 June 1844 Naamah was still in Peterborough, New Hampshire eagerly awaiting a general conference in mid July. She was unaware of the events that had taken place. For her, Nauvoo was an earthly kingdom situated on promontory overlooking the Mississippi River.

Over the next eighteen months, her life would be change dramatically.
The following is excerpted from Chapter Twenty-one of "The Believers".

​29 June 1844
Nauvoo
With his arm around his mother, George stood in the mourners’ line that snaked from the Mansion House. Close to him, Harriett bounced Eliza Ann since waiting under an afternoon sun was tiresome for a hungry infant. The queue inched forward, sporadically at times, but eventually turned the corner next to the Mansion House. A sobbing drone, sprinkled with occasional shrieks and moans, was omnipresent, triggering George’s emotional whirlwind. Perspiring, he wrung his hands while wondering what the sight of his Prophet would do to his fragile psyche. He squeezed through the Mansion House entrance into the hall. The stairway to the second floor lay ahead. Joseph and Emma’s portrait hung above the fireplace in the women’s sitting room to his left. The gentlemen’s parlor where Joseph had recently entertained politicians for his Presidential bid was to his left. His portrait in his military garb hung on the wall.

The house was packed with mourners, and the air was oppressive and malodorous from the thousands that had preceded George. Eliza Ann squirmed, and Harriett loosened her clothing and fanned her. George wiped his brow with his sleeve. The bodies lay close to the windows further magnifying the sun’s effect. They were more odoriferous than when George had returned with them from Carthage.

The stench of death triggered the hostility that George had sensed when in Carthage. Would the Greys attack, and if they did, would he be called to defend? He worried until he visualized himself thrusting a sword into an attacker to avenge his fallen Prophet. He relished the image until a breeze from Harriett’s fanning brought back reality. The women in his life needed him, and if he died, they would be left to flounder. He fretted, and when Eliza Ann squalled, his eyes welled.

Harriett rocked Eliza Ann until her squalling ceased. The Prophet’s wife Emma winced and massaged her side. Harriett thought of her joy whenever Eliza Ann had stirred within her womb. She couldn’t comprehend the anguish Emma must be feeling. And when Emma winced again, Harriett realized Emma’s unborn child would torment her with every squirm. She’ll never have the joy of being in a family way. And once her child is born? She couldn’t ponder further and clutched her sweltering daughter close. “How fortunate are we?” she whispered.

Harriett feared mob retaliation, too, although she never expressed her worries. Those fears returned, and her enchantment with her daughter left. When will an attack arrive?  She glanced at her husband. Will George be needed? Will he survive? She fretted and drew Eliza Ann close for comfort. Will I survive?  And with that horrendous thought, she clutched her daughter so tight she squirmed.

Eliza Ann grew heavy and cramped Harriett’s bicep. She handed her to George to flex her arm. But loneliness came quickly, and she grabbed her back from George and clung.

The Prophet’s mother, Lucy Mack Smith, captivated Susanna, and she reflected on her sorrow after Oliver’s death. Her thoughts were broken when Mother Smith cried out.

Her wailing tore through Susanna’s soul. She lacked answers for Mother Smith and felt helpless. In her quiet sorrow Susanna thought, The almighty grief that has been visited upon that poor aged woman -- upon us all.

Later that evening, Susanna sat in her usual chair listening to the increasing winds sweeping through Nauvoo to freshen the muggy air. She thought of Emma Smith, now a widow like her. I remember my first night without Washington. God eased me into it, but poor Emma hath been hurled into hers.

Other widows, even those widowed while their husbands carried on the Church’s mission, came to her thoughts. Sisters always comforted one another, particularly the widows. “There but for the grace of God go I.” That expression before Washington’s death had entered Susanna’s mind whenever she comforted a recent widow. At times, she uttered it glibly. But after Washington died, a widow expressed a more apt sentiment to console her. “There with God’s grace now go I.”

Images of church leaders on mission filtered in and out of George’s thoughts. Who would fill the void left by the Prophet, if indeed, anyone could? His thoughts swirled to worrying anew about an attack. But as he gazed at Eliza Ann asleep in Harriett’s arms, he ceased fretting to enjoy the blessing of a loving wife and child.

Harriett sensed her daughter was asleep and considered putting her to bed. But clutching her baby gave her a sense of worth and contentment. After a few minutes, she kissed Eliza Ann’s head and arose. My night will be restless, but yours need not be. Harriett left the room.

Upon her return, she reflected on the day’s events. The house was quiet until the winds increased. George arose to open the door and air the house. Harriett and Susanna smiled to acknowledge his thoughtfulness. The room freshened as did the moods until the winds roared. Lightning crackled and lit up the sky. A furious storm ensued, and George rose to close the door.

The crying from the other room could now be heard. Harriett sprang from her chair. “And she was sleeping so peacefully,” she said as she left for her daughter. A thunder clap rattled the house, and Susanna said with deliberate pauses, “It . . .  is . . . finished.”

She remained catatonic as the thunder and lightning continued. The storm drifted farther from Nauvoo, and a downpour ensued, stirring Susanna. She turned to George and said, “Heavenly Father’s way of protecting us this night.”
George left his thoughts and gazed at his mother. His brow wrinkled.

“The storm gives us peace this night,” she said. “The mobs will seek shelter and not attack.”

Susanna shrugged. “I know not about tomorrow.”