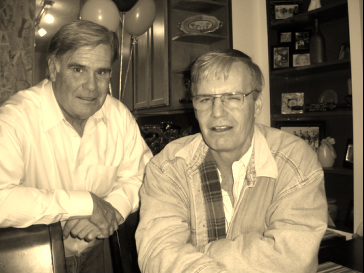 My brother and I ( shown left at a recent birthday for my granddaughter, Rachel Grace Mahoney) took a little road trip from Massachusetts to High Bickington, Devon, England, the only village where an "a" separates the "wol" from the "cott". That little tidbit was gleaned from www.wolcottfamily.com, a robust family history of the Wolcotts maintained by the Wolcott Society. If you have any Wolcott blood or any variation thereon, such as Woollacott, you must visit the Society's website. Since I planned on doing a little genealogical research and was leaving Martha's Vineyard in August when summer activity is always at its peak, Jill suggested that I take my brother. I think she was relieved when he said, "yes."

I had corresponded with a few distant cousins, who we met early in our trip. "We have a little event planned for you at the parish hall this Tuesday, can you make it?" asked Shirley Shapland, my father's 3rd cousin. We obviously agreed but my brother and I had a side bet on the over/under on how many would attend. We were blown away and humbled by the numbers that filled the parish hall.

And of course, I had to meet Charles HB Cole, who was chiefly responsible for turning my genealogical dabbling into an obsession. We journeyed down to Upcott Barton in Cheriton Fitzpaine and spent wonderful afternoon with Charles and his family.

Upon our return, we had numerous photographs and instead of letting them accumulate in paper wallets or remained locked as remote images on disc drives, I used some to create a photo journal of our trip. It has some genealogy to it, but not too much. After all, it was for those less keen on the rigors of genealogical research. But for those that have not yet visited this "old sod", it does create a picture of North Devon. Here is the link /uploads/1/9/2/5/19256439/the_woollacotts_of_north_devon.pdf