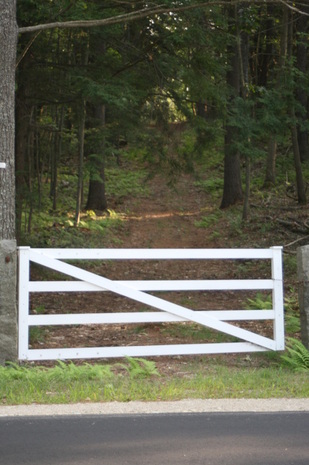 A jaguar sedan eased off the pavement onto the grassy shoulder and slowed to a stop near a white gate, four railed with an added diagonal rail for support. The driver pushed the button to shut off his Led Zeppelin CD, turned off the engine, sat for a few moments, then with resolve opened the door and eased out of his seat. It was dead quiet.  He looked up the rising hill and then back down the undulating road that he had just traveled.  The road was empty and only a distant house could be seen nestled in the wooded terrain that encased the road.


The car door slam broke the silence and startled him. Then he was embarrassed for disturbing the peace and by condition he looked around to apologize.

He took several deliberate steps to the gate and wondered if he should open it and trespass. His eyes descended up the trodden path among the towering spruces. It was dark, yet at the top of the hill was a beckoning light, obviously an open spot of land.


“Talk about your stairway to Heaven”

Dismayed at his flippancy, he thought about apologizing for be so irreverent. No need, his contrite thoughts were sufficient for he was the only person around; or was he? He lifted the large steel “U” which wrapped around the granite pillar, opened the gate, and then closed it slowly behind him, lest he disturb a soul. He inhaled, took a few steps and then with a final resolved to see it through, he hastened. After a few steps, the pine needles shuffled. He was disturbing the peace yet again and he stopped. Again he girded and recommenced his ascent. The shuffling needles were no longer disturbing, but rhythmic. Then crunching broke the rhythm and he paused yet again. Seeing the dried leaves, he started anew knowing what to expect. Chirping birds now accompanied the swooshing needles and crunching leaves, a pleasing symphony until the crows joined. Startled again, he stopped and turned to look back. His car appeared the size of a match box toy. 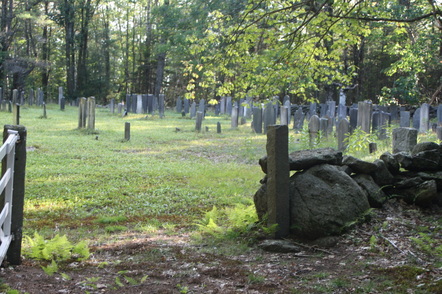 As he emerged onto the shadow's edge warmth trickled in and he paused to bask and then to survey an ill maintained cemetery plot. A white gate, similar to the one at the roadside hung off a granite pillar. This gate was opened, so without fear of trespassing he stepped out of the shadow onto the plot. The surrounding towering trees created varying light that flickered with the light breeze. The ground was an uneven mix of moss, ferns, weeds and grass; greens, pale yellows and browns. The upright stones were varying sizes, a few dirty white slabs, some dark grey granite chunks, several thin slate tablets and a sprinkling of coarse sandy grey rectangles.

Sufficiently acclimatized, his resolved returned and he meandered among the stones noting the names as he did. Some were quite familiar, Taggart, Nay and Spafford. Others evoked thoughts,

“Gragg, I wonder - kin to Senator Gregg?” and “All these Sawyers – of course, Sawyer Hill, Sawyer Farms.”

But this reminiscing was not why he came. He ceased meandering and perused methodically.


“Aha, that white stone that I saw that on the internet. Naamah’s father, Billings Carter, my,” and using his fingers to count while he thought further, “My three-greats grandfather.” 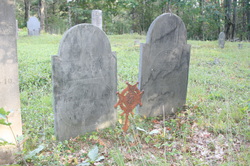 Then his heart pounded as he caught something unusual between two stones.

He stared at the medallion and tried to read it. It was too corroded so he pulled back and read the two stones. He had found his four-greats grandfather and grandmother, Reuben and Allis (Piper) Law. Weakened he just stood, while chills ran through his back and thoughts raced in his mind. He edged back to the stone wall and sat, listening to the quiet sounds of late summer as images flashed.

The only picture he had of Reuben was late in his life, dressed in a suit, a slight scowl on his face and eyes piercing from underneath a heavy brow. Those eyes were so riveting that he was compelled to look further into them; a blend of warmth and caring with sadness that only comes from years of seeing horror and experiencing sorrow. That picture replaced the grey slate tablet and the two remained locked in thought. He closed his eyes to amplify the thoughts until he heard rustling behind him. As a bow hunter he had heard that sound often,

“A squirrel or a deer? Sounds like a squirrel, not twilight yet.”

He turned slowly toward the sound , just in case his suspicion was wrong and opened his eyes. A bushy grey tail bounded among the leaves and then up an oak. He thought about where he might be a month from now, in a tree waiting for twilight. Deer generally stir at twilight once the forest is encased in light too dim for a predator. The shrubs, ground cover and deer become ghostly shadows, differentiating among them is difficult. Stare long enough at a grey ghost and it will appear to move, a gentle breeze or a deer’s twitch?

“It’s downright eerie at twilight; my how the mind can trick you.”

He turned back to Reuben, that lone picture was more vivid than before, images flashed incessantly and thoughts poured forth.

“Is this Reuben talking, the eerie light or just my overactive mind?”

Naamah, John Law, Dunbar, the bridge, Bunker Hill, the Carthage jail, things he had researched and then written about came helter-skelter, a veritable torrent and all he could do was absorb it. It was as though Reuben lacked anyone to converse with for centuries.

"Am I that clichéd long lost relative?”

His thoughts hovered around his recent research on the Latter Day Saints. Naamah, Joseph Smith, Brigham, and then a snippet from a book Understanding Mormonism came, “In order to discern the Holy Spirit one needs to experience the Gospel each day."

“Is this something greater, a holy spirit, a revelation? Ah how the hell would I know?”

He got up off the stone wall and moved closer to the gravestones. He wanted to touch it but was afraid. Maybe he should just let some things be. 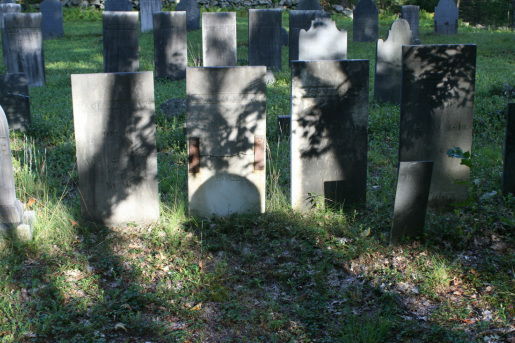 He meandered away, looking at stones as he did, and pausing to look toward the two grey tablets with semicircles on top and the rusty medallion between them.  He came across a small stone for one of James Law’s sons. Next to it were five more. So many children dying in their youth. Then he glanced toward where James and Esther Law and two of his adult children were buried. They all died within two weeks of each other in the Summer of 1849.

"Poor bastards, they endured so much. I can’t even imagine.”

His chill increased and he was unsure if the setting sun or his Jarmany Hill experiences were causing it. If it was his experiences, would they would remain? He headed out of the sunshine back down the path to his car. Once inside he sat for a few moments, trying to process it all. He couldn’t, so he turned the car on and slowly pulled off the grassy shoulder onto the paved road. Out of habit, he reached for the CD on/off button, but he didn’t push it. Led Zeppelin could wait, his thoughts were far more enthralling.

He headed up Jarmany Hill Road, then at Sharon center he turned south on Route 123, traveling it to its junction with Route 124. He paused even though there was no traffic. He had  traveled Route 124 out of New Ipswich to Jaffrey often. Route 124 as it nears the junction is banked such that it steers one onto Route 123. He always saw the sign "Sharon Arts Center" and a smaller sign "Sharon" with the pointing arrow as he swerved to stay on Route 124. At times he thought about going into Sharon, but never did, there was always something too pressing. But this particular day he was on Route 123 for the first time, leaving Sharon Center.


“How did that Robert Frost poem go?”

Today too, he had something pressing, to meet his brother Geoff for dinner so he turned onto Route 124 and drove parallel to the south side of Jarmany Hill. Geoff was a mere 10 minutes away at the family “camp” on Lake Contoocock which their grandfather Nault allegedly won in a poker game in the 1920s.  He was now travelling a  familiar road, barreling through the flat lowlands heading toward the small bridge across a stream that cut through the the Sharon swamp. As a young boy, he would leave “camp” with his family and proceed through Sharon swamp en route home. Those last trips each year just before the start of school were sad. Summer was over and swimming at “camp” was done until next June. As they passed through the swamp, his mother would always remark, “The Sharon swamp, the leaves always turn first in the swamp.”

It seemed so lame at the time and it didn’t ease the angst of no more swimming and the start of school. Flickers of oranges and reds reflected on the car windows as he sped along,

“You know mom, you were so right.”

His mind was racing seemingly as it never had before.

“Must have been that trip to Jarmany Hill, I’ll have to drag Geoff there someday."

Then he wondered what Reuben thought each year as the swamp unveiled its autumnal brilliance. He was probably quite aware of the changing seasons and what they meant. Reuben's September angst probably centered on completing the harvest and ensuring the woodpile was stacked high before the snow flew; same family, same swamp, same colors, but different angst and time marches on. Other descendants will surely follow. How different will be their angst?

He ran his hands through his hair to ease the unsettling feeling. It didn't work. So he reached for the CD on/off button, paused and ...