Once my Woollacott leg of my four-legged stool had been extended, I looked elsewhere. Remembering my maternal grandmother, Grace Belle (Young) Nault, had attended DAR meetings in Peterborough, New Hampshire in the 1950s,  I contacted them and gave them her particulars. They responded quickly that my patriot was a Private Reuben Law. Initially a bit disappointed, I mused, "Guess no Order of Cincinnati for me." But while googling, I got several hits on a Private Reuben Law who was in the Acton Militia.

"It has to be him. How many Reuben Laws can there be?"

Further research confirmed my suspicions. I wondered what he might have been thinking on that fateful day. The Acton Militia was formed in September 1774, and the militiamen were paid eight pence a half day. They drilled twice weekly. Their Captain Isaac Davis was a determined and principled man. Some of Reuben's kin, friends, and acquaintances had joined the Militia, which I surmise increased the camaraderie. So when three shots were fired early on 19 April 1775 signaling an alarm, what did Reuben think; and so too his thinking, as he marched, and when Captain Davis fell, and as he lay awake that night?  No doubt he realized the day was far different than any other. But how soon, if ever, did he realize the magnitude of what happened that day at the bridge 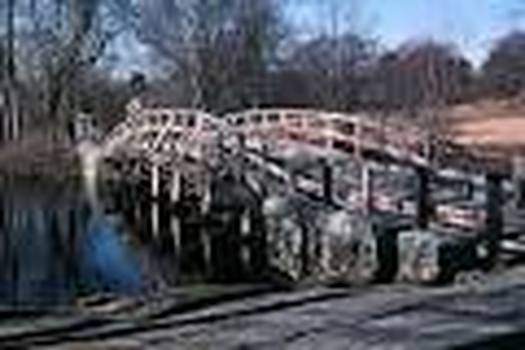 On route from Concord’s North Bridge

I’ve got to get home.

That recurring thought helped to keep Reuben Law tied to reality as he returned with the Acton militia from a horrific morning at Concord’s North Bridge. Events had been intense and occurred in a rapid fire fashion to process and comprehend them all. He had not been so overwhelmed since his father’s death years earlier. Today, a colossal serpent was within him, and he was unsure when the next undulation would roil his stomach, only that it would. Reuben’s inner essence whose existence had been created in part from his forebears’ experiences had born witness to a similar horror over one hundred years earlier on Doon Hill at Dunbar, Scotland. Thus, his soul could comprehend what Reuben was still incapable of.

Three reverberating musket shots had rousted him from his sleep to usher in his morning -- a call to arms for the Acton Militia. "Would this be just another alarm or something more?" As he had exited the house, his mother foreboded dread and pleaded with him not to go. The image of her hand wringing had continued to haunt him as he hustled to his Captain’s house in an eerie pre-dawn light. Along the way, twinkles from his favorite constellation had soothed him, and just the sight of Captain Davis's house, had eased him further. His Captain’s presence had a calming influence similar to what he felt from his father whenever his young world had been shaken. The march to the bridge with fifing, drumming, and the singing of 'The White Cockade' had increased the camaraderie and depleted his pent up adrenaline. Inspired, he had remained emboldened until he spotted a Grenadier's bearskin mitre cap rising above a sea of red coats. His stomach gurgled when his companion serpent fluttered.

As the Militia moved past others to the river's western edge, the harmony of warbling birds punctuated with chirps and occasional gurgles as eddies moved under the bridge had comforted him. Beyond the bridge, swirling circles widened before dissipating to the lazy flow that has replayed every spring since creation, part of the world order. But this spring morning, troops massed across a bridge from one another  had seemed out of order. A musket roared, and the serpent ripped through his stomach. Smoke billowed, muskets roared again, and Captain Davis’s chest exploded like a star spewing a crimson shower of flesh. When the volleying ended, the Captain’s blood flowed as effortlessly as the water beyond the bridge. The exhilarating aroma of gunpowder that had heightened the camaraderie when Reuben had practiced in Captain’s yard was left to bygone days. A pungency permeated his lungs as the horror at Concord’s North Bridge seared his soul.

Now, his stomach knotted as he neared for a second time the Davis homestead, a two-story dwelling with a centered chimney, a steeply pitched roofed barn, and a windowed shed nearby. He had always viewed the buildings as forming a fortress to protect the inner yard, symbolic of a strong, impenetrable Captain. Today, sobbing women and befuddled children filled the yard; it didn’t feel like a fortress at all.

He left his comrades to speak to Hannah, his fallen Captain’s wife. As he wended toward her, he focused on the levering pole used to gather well water that rose above the crowd to divert his eyes from the curious ones that followed him. When he took hold of her hand, she flinched and her sobbing ceased. He rested his other hand on their clasp as a confused Hannah waited. Reuben waited, too, allowing the serpent to recede from his throat, and then he spoke.

The above snippet is edited from the first Chapter of "The Immigrant". 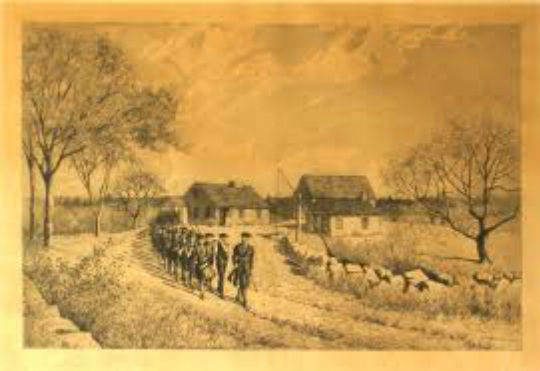